Backed by COVID-19 relief funds, Somerset County is divvying out $1.7 million to upgrade broadband internet offerings or “4G” access points to some of the most internet-scarce segments of the county.

Much of that will be delivered through the creation of small-scale wireless “hot spots” in school buildings, libraries, churches and municipal buildings “with the intention of expanding from household to household later on,” President Commissioner Gerald Walker said.

This activation is the first Go Live for the project, which was originally announced in July 2018, and also includes dispatch centers in the cities of Cuyahoga Falls, Fairlawn and Stow.

In total, 18 communities and the University of Akron will receive the benefits from the new system once fully activated.

The new CAD system replaces outdated computer-aided dispatch systems that do not have the ability to operate with more advanced 9-1-1 technology.

The firm cost of a 911 emergency radio communications project estimated between $16 million and $24 million won’t be known for about two weeks, Luzerne County 911 Executive Director Fred Rosencrans said this week.

Unlike traditional bids for construction or materials containing one bottom-line cost, the lengthy radio project proposals include a range of equipment, technology and support service options that must be analyzed, Rosencrans said.

Lebanon County’s Department of Emergency Services is in the midst of an update to the County’s 911 emergency phone system. Funding is coming from a state grant, not out of the County’s budget, according to DES director Bob Dowd.

A $1.7 million dollar grant from the Pennsylvania Emergency Management Agency will do more than simply help DES modernize its phone system. 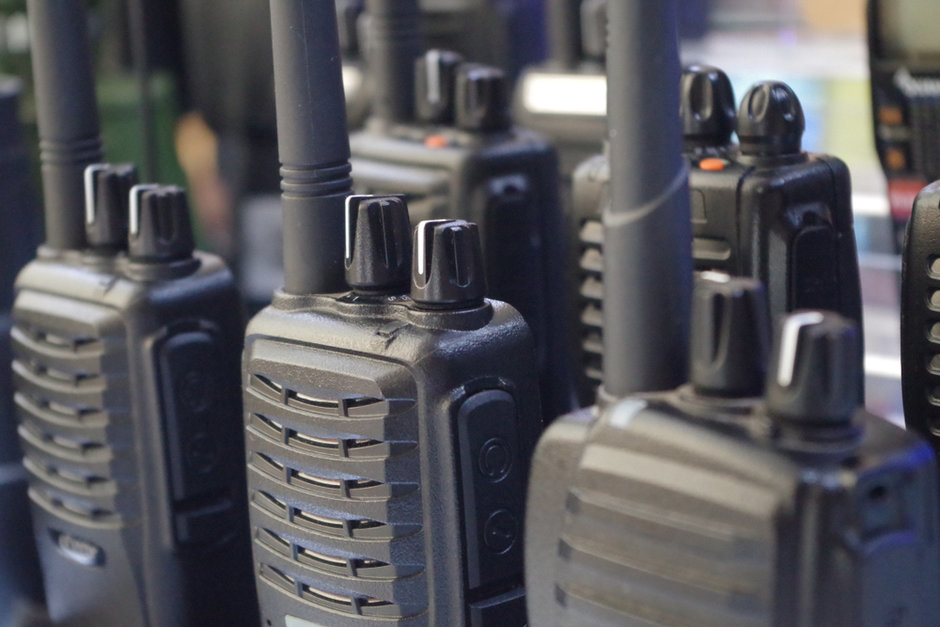 Officials in Luzerne County, Pa., are trying to put hard figures to a migration away from an outdated emergency communication system — support for existing transmitters and receivers will end in late 2020.

(TNS) — Luzerne County, Pa., has invited vendors to submit proposals for its 911 emergency radio upgrade, which will finally put a firm price on a project that had been estimated at around $20 million.

“Now it’s time to give council and the county manager real numbers to work with so we can figure out what we’re able to afford,” said county 911 Executive Director Fred Rosencrans.

Luzerne County has invited vendors to submit proposals for its 911 emergency radio upgrade, which will finally put a firm price on a project that had been estimated at around $20 million.

County officials want to switch from a 20-year-old analog system to a digital one because equipment support for the radio transmitters and receivers that allow emergency responders to exchange messages will end Dec. 31, 2020. The system won’t automatically shut down on that date, but replacement parts have become increasingly difficult to find because they are no longer manufactured. 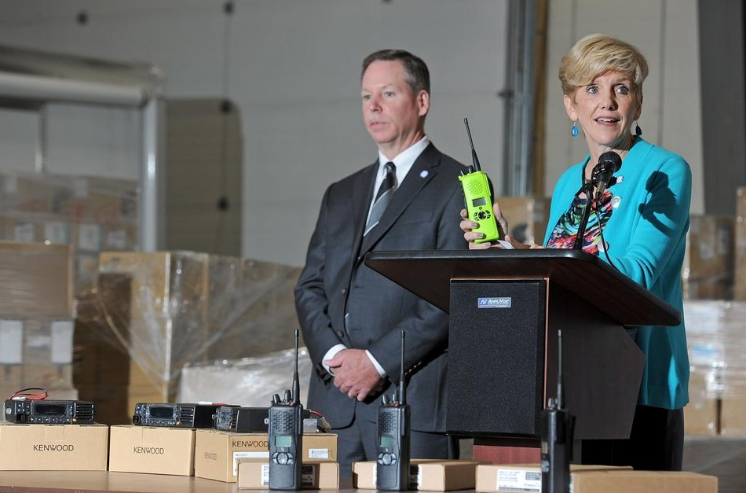 John Grappy, left, director of Erie County Public Safety, and Erie County Executive Kathy Dahlkemper in October 2017 show off some of the portable radio units that will be used as part of the county’s Next Generation Public Safety Radio Project.

What you need to know about the $26.4 million program that’s about to go into effect.

They approved an agreement with MCM Consulting, Inc., for Feb. 1–Dec. 31, 2019, to provide professional services for 911 planning for the Tioga County Department of Emergency Services...

Council recently voted to hire Pennsylvania-based MCM Consulting Group for $380,357 to handle the first stage of the proposed $20 million 911 radio project. The company will help determine the county’s equipment needs, prepare a comprehensive bid seeking interested vendors and identify grants and other possible outside funding.

The switch from a 20-year-old analog system to a digital one is warranted because equipment support for the radio transmitters and receivers that allow emergency responders to exchange messages will end Dec. 31, 2020, officials have said.

"Integrating the records management system with New World CAD will greatly enhance data sharing across the 10-county region and will enable agencies across the area to create efficient workflows for improved effectiveness."

Council approved a $380,357 contract with MCM Consulting Group to manage the upgrade project. County officials say it needs to be completed by 2020, when the manufacturer will stop providing support for the analog system currently used by 911 dispatchers and emergency responders throughout the county.

UNION CITY — Erie County Executive Kathy Dahlkemper marched through the mud as she approached the base of what will be a 263-foot-tall communications tower. She looked up to the three workers from ECI Wireless who were bolting down another massive steel section of the tower 120 feet overhead.

On Tuesday, Dahlkemper, along with John Grappy, director of the Erie County Department of Public Safety, and others toured the last of eight new tower sites that are part of the county’s Next Generation Public Safety Radio Project. Construction on that tower, which is located at a PennDOT facility in the 9200 block of U.S. Route 6 in Union Township, was expected to be finished late Tuesday or sometime Wednesday, depending on weather conditions

Emergency crews throughout Erie County are getting a long awaited update to their radio systems. All emergency crews in the county will be equipped with a new radio system that allows them to communicate with other agencies who might also be responding.

Before, crews from different townships were unable to communicate directly.

Lycoming County officials have hinted at overhauling its public safety communication system on various occasions over the past year.

On Tuesday morning, the commissioners heard a presentation from Michael McGrady, president of MCM Consulting Group, detailing that a study lasting longer than nine months showed such an overhaul will cost about $7.4 million.

"That’s to build a system that’s going to last you for up to 20 years,” he said. “It’s a pretty good investment."

The Summit County Consortium worked closely with MCM Consulting Group, Inc. to evaluate potential vendors that would meet the needs of all six PSAPs, which answer approximately 665,000 services calls each year.

MCM Consulting was impressed by Tyler’s robust solutions and their features and functionality, which would fully integrate each PSAP’s respective systems, creating efficiencies between all agencies.

Work ramped up this past week on the construction of eight new communication towers and at the sites of nine existing towers. Those towers, scattered throughout Erie County, are part of an intricate infrastructure upgrade that will improve communication between emergency responders, their counterparts in neighboring communities and dispatchers.

The project marks what public safety officials believe is a long-overdue transition to a digital platform. Safety forces now operate on a patchwork of frequencies, from low-band to UHF and VHF.

Tioga County was looking to migrate from TDM to Ethernet technology and chose RAD’s solution based on recommendations from MCM Consulting Group, Inc. (MCM) and Tessco, a leading wireless system integrator and a RAD partner. Tioga County had decided to create a dual network path based on an existing DS3 microwave system that provides voice and data services for first responders.

AKRON, Ohio - Summit County, Cuyahoga Falls, Stow and Tallmadge are taking the next step in the process of consolidating their public safety dispatch operations.

The four communities, along with newcomers Fairlawn, Green and the City of Akron, announced on Oct. 11 their intention to hire MCM Consulting Group, Inc. to advise them on the implementation of the consolidated computer-aided dispatch (CAD) system and the possible consolidation of their dispatch operations.

Equipment arrives early for next phase of county radio project

About $6 million worth of mobile and portable radios, as well as control stations, will be installed in police, fire and emergency medical services vehicles across the county starting later this month.

New equipment for Erie County’s $23.2 million public safety radio system has arrived early and will be installed in police, fire and emergency medical services vehicles across the county starting this month.

The goal of the “Next Generation Public Safety Radio System” project is to move the existing system and its users onto a common communications platform. Doing so will enable emergency responders to more effectively communicate with each other, including among different departments.

The project was approved by Erie County Council in August 2015. MCM Consulting Group is managing the project and Texas-based E.J. Johnson won the bid to provide the equipment. Another company, Mobilcom, will install the mobile radios and control stations.

Summit County and several local cities intend to hire a consultant to guide them in exploring a shared dispatch system, and perhaps even consolidation of their physical operations.

If approved by their respective councils, MCM Consulting Group Inc. will advise the county and the cities of Cuyahoga Falls, Stow, Tallmadge, Fairlawn and Green on the implementation of a consolidated computer-aided dispatch system and the feasibility of an outright merger of dispatch operations.

Akron has also asked to be included in discussions about joining a shared computer-assisted dispatch system, but is not included in talks concerning the consolidation of all dispatch operations.

Officials say equipment purchases for the radio project are under budget

Those expenses are being closely monitored by MCM Consulting group, which is coordinating the public safety radio project for the county. Michael McGrady, MCM’s president and chief executive, also told the Erie Times-News that equipment purchases for the radio project are under budget.

Speaking at the opening of the fire service and local government symposium Saturday, County Commissioner Rick Mirabito urged the group to think about the future of area fire services.

“From a bigger perspective, we have to think about how we’re going to deliver fire services not just two, three years from now, but really 20 to 25 years from now,” he said.

Due to 911 legislation passed in 2015 (ACT12), which funds a large percentage of all PSAPs operating budgets, non-county PSAPs in Pennsylvania are required to consolidate. The cities of Bethlehem and Allentown are both scheduled to lose their funding for their individual PSAPs in 2019. These cities are the last two municipalities to hold PSAP status and funding due to previous legislation.

To determine the best approach to the pending consolidation, the counties and cities hired MCM Consulting Group, Inc. to conduct a PSAP study on the best way for the neighboring agencies to address the requirements. Their study revealed that implementing a common software system for Lehigh and Northampton counties would be the most efficient and best approach for better public safety.

Snyder/Union 911 merger could save $1M

Plans to combine Snyder and Union counties’ 911 centers at one location in Penn Township, Snyder County, for a savings in excess of $1 million and improved services are moving forward.

About 60 emergency responders, law enforcement and community leaders attended a meeting Tuesday to hear the proposal pitched by MCM Consulting Group Inc. President Michael McGrady to merge the agencies in the next two to three years.

A consultant is recommending a Luzerne County 911 emergency radio communications system overhaul and upgrade that would cost an estimated $19.26 million and take several years to complete.

WILKES-BARRE -- Luzerne County announced Monday that changes are coming to improve the response to emergencies.

The last time Luzerne County 911 updated the system was about 20 years ago.

Mike McGrady Honored with Citizen of the Year Award

Michael McGrady, President and Chief Executive Officer of MCM Consulting Group, Inc. was recently honored as the Citizen of the Year during a ceremony at the Erie County Firefighters Association annual banquet.

Mr. McGrady and his company have been committed to the assessment, design and implementation of the Erie County next generation emergency communications radio system.

The Erie County Firefighters Association recognized Mr. McGrady and his company for their deep commitment to enhancing communications for first responders.

ALLENTOWN — A 911 regionalization study has recommended merging the Allentown and Bethlehem 911 centers with Lehigh and Northampton counties, respectively, in the next two years with an eventual goal of creating one regional center.

A 911 regionalization research has really helpful merging Allentown and Bethlehem’s 911 facilities with their respective counties within the subsequent two years with an eventual objective of making one regional middle.

Allentown, Bethlehem and Northampton and Lehigh counties are going study whether they should share 911 dispatch services.

The study, which will start in September, will look at both whether all four entities should merge dispatching and also whether Bethlehem should join with Northampton and Allentown should join with Lehigh.